Yesterday, Saturday, I visited Antwerp. It is a Dutch speaking city in Belgium. In Dutch Antwerp is spelled Antwerpen. It also has one one of the largest seaports in Europe, the 2nd largest I believe. The city is located on a beautiful and peaceful river called Scheldt. Antwerp is known for diamonds, shopping, and of course its seaport.

I really enjoyed visiting Antwerp we were top notch touristsyesterday! After a night ofchugging beer waking up at 7am was definitely interesting. We went to downtown Brussels to take about a 40min trip to the city of Antwerp by train. The train was full of European pre-teens that later we found out were going to some event called “laundry day.” Don’t even ask… We visited so many sites. We went to the Grote Markt, the main square of Antwerp. The city hall was located right in the square so I witnessed about 4 weddings yesterday, apparently people are constantly getting married. We saw the National Maritime Museum, a museum full of all types of boats! It was really fascinating to see.  We got on a bridge with an amazing view of the river Scheldt. We even went to what used to be Napoleon’s kitchen and witnessed some pretty cool chocolate sculptures. 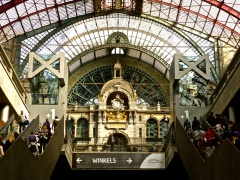 After the sightseeing we drank some beers, like true Belgians, and off we went shopping. I am not really a shopper so I mostly just walked around the stores while my friends shopped. I did splurge when I went into Forever 21 though! Finally got myself some red pants and bought a nice little dress 🙂 As we finished with our splurges and thought about our bank accounts we witnessed a parade with lively Africandrums, the people were promoting their church. A little after that we found a Brazilian and Mexican food place where I wasted more money than necessary. We got a pitcher of Martini’s, which I wouldn’t recommend having if you end up eating spicy food and don’t like spicy food! It felt like my mouth was 10x more on fire whenever I took a swig! (But I had no water and was definitely was not purchasing one) Might as well been having straight up hot sauce! I had 2 tacos with rice and if it wasn’t for the spiciness it would of tasted absolutely delicious! 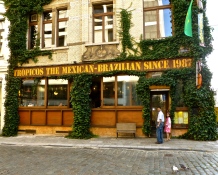 After dinner it was time to head home. I was absolutely exhausted!! Never did a shower feet so good! But overall Antwerp was a huge success! 🙂

My name is Tiffany and I am on the road to self-discovery. I am at a point in my life where I am realizing that the best thing to do in life, is to simply be yourself. I am trying things I never thought I would and discovering so much about myself on the way. The world is our playground filled with many obstacle courses and through it all we just need to hold on and make the best of the journey by simply being great.