The view at the end of Avenue Louise

Today, I explored the street in which the office of my internship is located, Avenue Louise. I had to make 2 deliveries of flyers and posters for the Art Fair. I had to Google maps one of the locations, and as I said before Belgium Google maps sucks! I left to my journey a bit scared because I had 2 hours before I had to be in French class. Luckily, the places were close but still it was a race against time.

Avenue Louise is a street where expensive and sophisticated are common adjectives when referring to the stores on the street; kind of reminds me of Madison Avenue and Fifth Avenue in New York City.

The unique things about Avenue Louise is that at the end of the street there is an absolute beautiful view of Belgium! It is just incredibly breathtaking you can honestly stare at it all day! So what I do? Hop on the tram and ride it all the way towards the end of the street!! I take in the view for 5 minutes! Even interrupted a French couple from their PDA to take a picture of me! ^__^ I had to remember the moment! Afterwards, I literally sped walked/ran to try and find the 2 locations where I had to drop off the packages! I got lost for a few minutes, but since I’m becoming a pro at getting lost and finding my way I managed to finish the deliveries by 3:30pm making it to school a half hour before classes started! Boy was I proud! But dam was I exhausted!!!

Side note 1: Earlier in the day I was having lunch with my co.intern at this one random bench in the middleof all this open grass 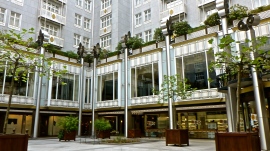 Secret mall to the side of the Conrad hotel!

area. Next thing you know these 2 guys, one from Africa the other from the Netherlands, approach us saying in French that they have the bench reserved for 1:00 ._. I was giving them the “keep it moving before I go off on you” stank look. My co.intern nicely started a conversation with them and made space for them to fit on the bench! Later on I told her how if that was to happen in the U.S. I would of gone all Dominican on them! She went on to explain to me that it’s normal to be friendly  in belgium O__0 Found that to be quite interesting because I don’t do well to random men approaching me. But thanks to the African guy I learned that mainly all Africans from Belgium come from Congo a Francophone country in Africa! He’s the second African to tell me he’s from Congo so I’m making the educated guess.

Side note 2: As I walked to the tram to head to school I turned because I thought I heard a familiar sound. And indeed I wasn’t going crazy! Someone was blasting Romeo Santos “La Bella Y La Bestia” I was in total shock!! I practically ran to catch up with the car at the light to find a Dominican man inside the car!

Well I must say Avenue Louise was definitely an experience and I’m sure there will be more experiences to come in that street.

My name is Tiffany and I am on the road to self-discovery. I am at a point in my life where I am realizing that the best thing to do in life, is to simply be yourself. I am trying things I never thought I would and discovering so much about myself on the way. The world is our playground filled with many obstacle courses and through it all we just need to hold on and make the best of the journey by simply being great.